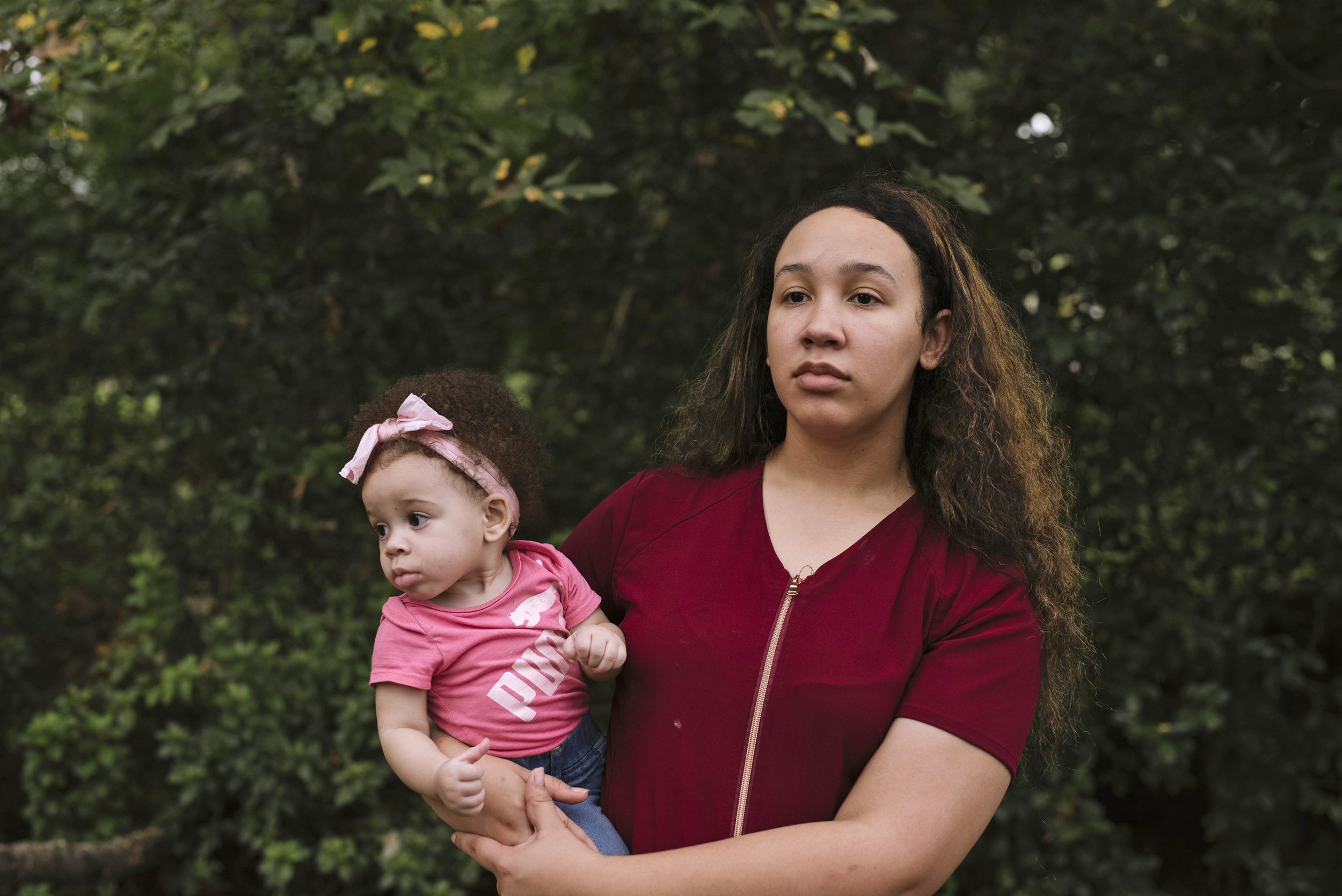 JACKSON, Miss. — As the delta variant crept through Mississippi this spring, Ashley Brown kept showing up at her elderly clients’ homes, arranging their medication into pill organizers, sweeping their floors and washing their clothes.

Then she contracted Covid-19 in July, forcing her off the job for two weeks. She thought a negative test was her ticket back to a paycheck. But her shifts were reassigned while she quarantined — and when she recovered, her job was gone.

Women of color like Brown, whose mother is white and father is Black, are often likely to have low-wage jobs like home care work, which offer a critical service but lack protections, including paid sick leave and predictable schedules.

By August, what had started for Brown as a two-week pause without income threatened to stretch indefinitely. The 24-year-old mother of four started filling out applications for fast-food restaurants and a tool manufacturer. But the early-morning hours would make it all but impossible for her to arrange child care.

The career she had lost had been her best option.

“That’s the only job that works around my kids’ schedules,” she said.

More than a year after the country’s pandemic-driven recession officially ended, Brown’s struggles in Carrollton, Mississippi, illustrate how the nation’s economic recovery continues to be unequal along racial and ethnic lines.

Among the millions of unemployed Americans who sought jobs in August, prospects were particularly bleak for Black workers, who were the only racial or ethnic group whose unemployment rate increased overall. About 9 percent of Black men and 8 percent of Black women were out of work in August, an increase of about half a percentage point from July for both groups. The outlook was better for white men and women, who had the lowest unemployment rate of 4.5 percent.

The gap does not come as a surprise to economists. Even in better times, the nation’s unemployment rate has been dogged by racial disparities.

William Darity, an economist at Duke University, pointed out that Black unemployment has generally hovered at double the rate of white unemployment, since the federal government began tracking the data by race.

“It typically has held up in that way, regardless of whether the economy is in an upturn or downtown,” he said. “As a consequence, there really has never been an improvement in the Black unemployment rate that has brought it into parity with the white unemployment rate. That holds regardless of educational attainment.”

​​ When labor markets go through rough patches, Black workers are more likely to lose their jobs first, even accounting for years of work experience and skill level. In stronger economies, their employment rates still trail the national average. The persistence of this cycle has led some economists to ask how racial bias may play a role.

“Discrimination is happening on multiple fronts,” said Kate Bahn, chief economist at the Washington Center for Equitable Growth, a nonprofit research group. “It’s happening on the downturn if you get laid off and then also, the degree to which hiring picks back up, there could also be discrimination in hiring. So that would also disproportionately harm Black workers.”

“They’re both facing worse opportunities because of structural racism, as well as the unique factors related to the pandemic that disproportionately put them in positions of risk in response to the public health crisis and the economy,” Bahn said.

In August, the labor force participation rate for Black workers grew, which indicates that more people were looking for jobs. The rise in unemployment signals that their demand for work was not met.

“Just because you’ve lost a job doesn’t mean that there’s one available to you that matches your skill set and pays a wage that you need to live that you could get to,” said Kristen Broady, a Metropolitan Policy Program fellow at the Brookings Institution,  a nonprofit focused on public policy.

Unemployment in Carroll County, where Brown lives, hovers just above the state’s average of 6 percent, while two of the four neighboring counties have unemployment rates of 8.1 percent and 12.2 percent.

Black workers are facing higher unemployment rates as safety nets are being whittled away, including the nation’s eviction moratorium, recently struck down by the Supreme Court, and federal unemployment benefits. What results, Broady said, is a precarious situation for workers in jobs without the ability to telework.

“Companies are saying they can’t find people to work, but you’re paying minimum wage. You’re not providing any sort of protective equipment for workers. You’re not making customers protect themselves. Kids still may or may not be in school depending on where they are,” she said. “When you cut out benefits, people are forced to go back into these bad situations in some cases.”

Among those feeling the pressure over the past year was Chephirah Davis. She left her job at a Dollar General in Mississippi last October, after she was unable to pick up more than a few days, and at times hours, of work per week. Her days, she determined, would be better spent helping her 14-year-old daughter with online school.

She brought in some cash by braiding hair, and her father helped with $150 each month, but she lacked the security of full-time work and soon started worrying about how she would afford the internet needed for her daughter’s classwork. If a client had to choose between paying bills or a new hair appointment, Davis knew where she would fall.

On some nights, she tried to make a meal out of packages of noodles.

“Sometimes, I would have to walk outside just to make sure I was still living in reality,” Davis said.

Relief came when she was accepted into a Jackson-based universal basic income program called the Magnolia Mother’s Trust, which provides $1,000 per month for a year to Black mothers living in poverty. Participating allowed Davis to give her daughter an allowance and open up a savings account for her. The 32-year-old dreams of owning her own hair salon one day, but still needs steady income until that happens. In six months, the disbursements will end.

After seeing a hiring sign in the Burger King near her house for three months, she went in for an interview. In July, she started training as a manager there.

In Carrollton, while Brown waited to hear back from her former home care employer, she focused on preparing her two oldest children, who are in pre-K and first grade, for the start of a new school year. In late August, she finally got the call that new clients were available.

Her first check back was for $355. The next one was $474, closer to what she used to bring home biweekly, but her expenses pile up. She drops $25 every time she fills up her car to visit her clients, and her youngest children are 8 months and 2 years old and go through diapers and pull-ups quickly.

Plenty of barriers to stability remain. Brown is one of thousands of parents who advocates in Mississippi say have lost a voucher that helps low-income families pay for their children’s day care tuition. Previously, she qualified for about $250 per week in assistance.

Brown said her certificate was taken away after an eligibility check, when reviewers claimed she had not taken the steps to receive child support payments for her children, an assertion she denies. (Mississippi requires recipients to pursue the payments to receive the vouchers.)

For now, she’s relying on a fragile arrangement offered by the center she attended as a kid to pay what she can.

“I really try to keep my head up and pray for better,” she said. “I get scared. I don’t want to get in a hole.”

Gas prices are up, but red America may be paying more

Elon Musk to donate sliver of net worth for carbon capture