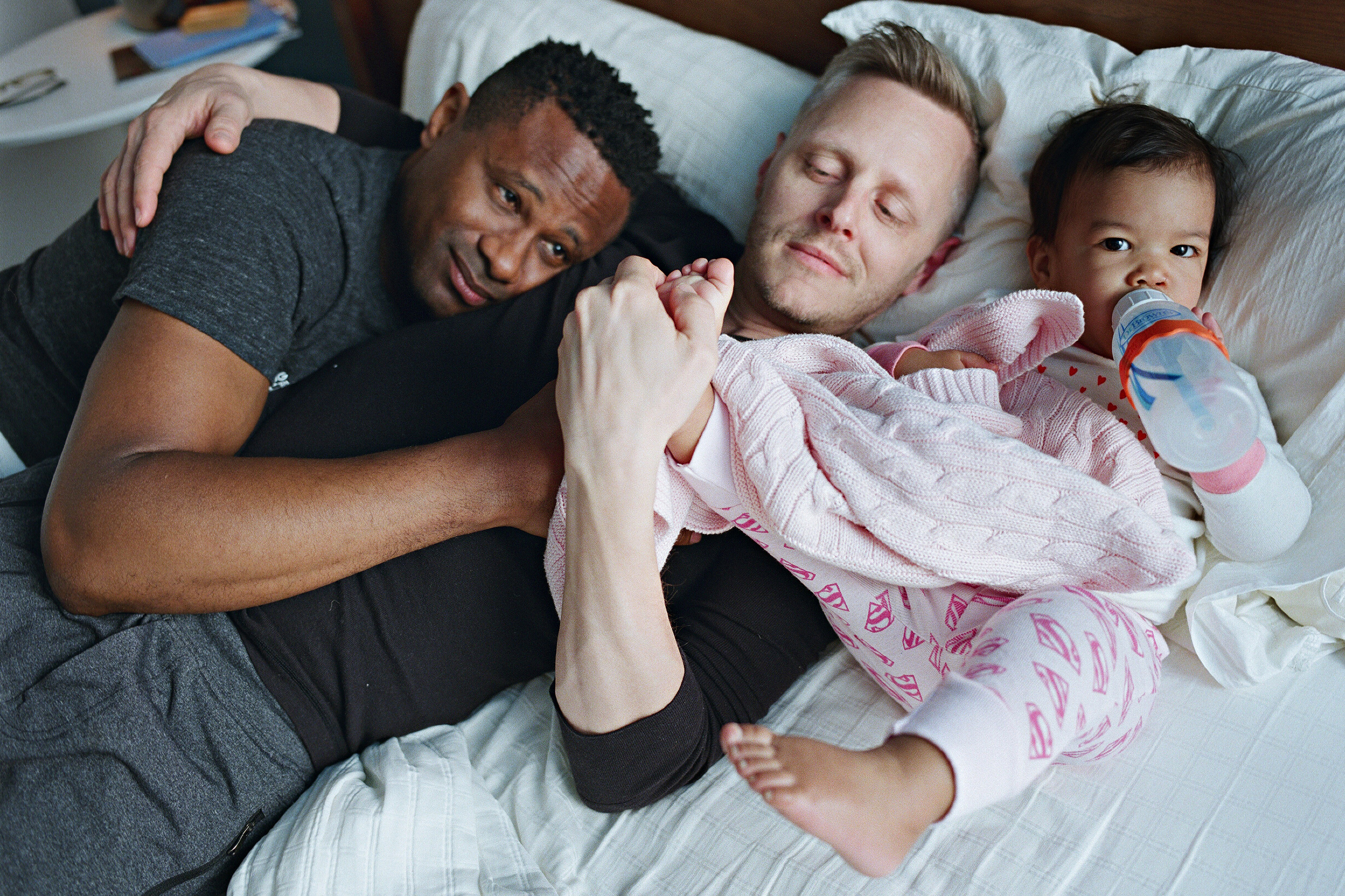 In one picture, Hibma, Thompson and Genhi are lying in bed. Hibma is cradling Genhi’s foot in one hand, and holding Thompson with the other as they both look lovingly at her. It’s a tender moment that is familiar to any new parent.

The book is notable, too, for its diversity, both in who Heynen photographed and the range of their stories — as there are many roads to fatherhood.

For Hibma and Thompson, their road was through adoption by way of a chance message on social media.

Devon Gibby’s path was one that some might consider to be more conventional: He married a woman, and they had children. As time wore on, however, Gibby’s acceptance of himself as a gay man collided with his marriage and his Mormon faith. Yet, he said it changed nothing for him about being a father.

“I’ve always wanted to be a dad,” Gibby said. “The idea of having kids with another man was not even an option to me. Awareness is not always there when you just don’t have other role models that are gay parents.”

Gibby’s story is told across five photographs in the book. The first shows Gibby at 8 years old in a family photo. The second is a portrait where he seemingly blends into the vast Utah landscape. In the third, he exudes optimism as he’s about to make his weekly journey from his apartment in Salt Lake City to Logan, Utah, where his children live with his ex-wife. In the fourth, Gibby is spending time with his children in a hotel, as that’s their ritual. In the fifth, Gibby is silhouetted against the late-day sun, a deeply contemplative and evocative image that speaks to his journey.

His hope is that his story can help those who might be struggling like he did before he came out, especially for those living in parts of the country where acceptance is harder to come by.

“I would just hope that people would see me, someone living in Utah, and be able to relate to that and find some inspiration in that to be who they are,” Gibby said.

The book encompasses a wide range of stories with a common thread: men who love and care for their children.

Instead, he said, he’s typically focused on “everything that any parent has to worry about, like, “How do I get her to school on time? Does she have clean clothes? What is she wearing?”

What distinguishes the book, too, is how seemingly ordinary the photographs are. Men play with their kids. They get ready for the day. They travel. They relax. They eat. They live their lives. In many ways, they’re no different than any other family.

“They are crucial in the sense that without them, there would be no gay dads,” Heynen said. “It would be very disrespectful just to have only these dads. I can tell with several families that they are still so influential.”

Perhaps the most surprising story is that of Matthew Eledge and Eliot Dougherty. They got married in 2015 and began exploring the process of starting a family two years later. Yet, because they live in Nebraska, the prospect of having to navigate adoption agencies as a gay couple in a conservative state seemed insurmountable, so they set their sights on in vitro fertilization.

“When we first started doing meetings with our IVF doctor, it started to come together,” Eledge said. “But it was really daunting. Eliot’s a hair stylist. I’m a teacher. It’s not like we have these really lucrative fields that we work in. As we were trying to search for options, our family members stepped in.”

Asian American were elected to lead 3 cities as mayor. Here’s...